Work and school went on. It was a beautiful day. The only thing that seems to matter is the election.

After work and school, the kids preferred to spend a little time on screens indoors, instead of going to a park, or even just around the block on bikes. They did play with the dogs in the yard for a bit, but then settled in for some television and iPad games.

This left the adults to keep peeking at the election. It's been tense, to say the least. A lot of the expected extended duration. Even when it's expected, it still doesn't make it easy. I tried to keep my news watching limited to the map, as shown below, leaving the headlines and Twitter alerts to come from co-workers or the wife.

I took a few breaks from work and election news to drive around, delivering and fetching the little little from school, and grabbing some "come in and grab your order" take-out. Took the long ways with the windows down and the radio loud, and not tuned to news. I contemplated a motorcycle ride, but with the sunset around 5PM, I didn't really think about it early enough. Maybe tomorrow.

Of course, everything could change. I hate to give into media projections, but they're getting to the point where they're statistically significantly accurate. All of this with caveats for processes and late counting and lawsuits...

Currently, Biden is ahead 264 electoral votes to 214 for Trump. 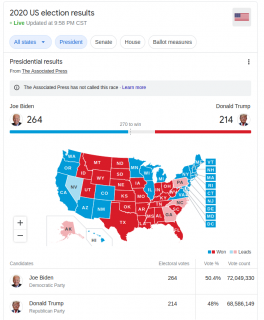 States totaling 54 electoral votes are leaning toward Trump at the moment, and 6 for Biden, which is all he needs. Really, Trump needs all of the remaining states, or other action to change votes. Biden needs any one state, except Alaska, where he would also need another state.

It's a tight race for the 6 votes in Nevada, with a narrow 8,000 vote lead for Biden, but still only 75% of their votes reported.

Another shift at the moment is the 16 electoral vote Georgia, with a known 120,000 votes yet to be counted, and a shrinking 20,000 vote lead for Trump. Although, as I review this before posting, it's stretched to 30,000 votes again. Only 98% reporting, and still counting early/mail/absentee ballots.

Again, as it stands, it'll take any state, except Alaska, for Biden to win, and all states, including Alaska, for Trump to win.

Challenge rhetoric has already gone up for some of the narrowly called, previous Trump states, like Wisconsin and its 11 electoral votes, going to Biden by 20,000 votes. There are some close races or counties that might trigger automatic recounts; that's been mentioned, but not in any specific case I can recall.

This will take some more days.

What really has me going with all of this is how close it is. I know that there's a lot of rural America that tends to always go Republican. I get also that there are some steadfast voters there that don't care about Trump or whomever is there; still voting that way. The the impeachment, the presses for violence, the animosity generated around the world, the repeated questionable if not illegal antics, and just the total lack of class...I figured any of these would have weighed on more minds.

Maybe it did. Maybe it turned down a 75% Trump run-off to this 52-48 run we've got now. The polls seemed to indicate it would be a Biden run-off in the 70-80% range, which has surprised many pundits. I'm no pundit, but I am surprised.

I'm turning in, and we'll see if we have a tentative answer tomorrow.

Everyone is healthy. Election stressed, but healthy.

This entry was posted by Jeff and filed under Coronavirus. Tags: coronavirus, take-out, vote, warm.

We're embarking on unprecedented times, and with the imposed social distancing, a new household operating pattern and work impacts. Here I'll try to share our experiences and observations. Read along, if you're interested.