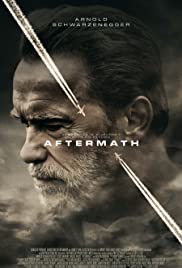 As the little one finally crashed for a much needed nap today, I found a pretty calm drama to put on.

I found this survivor story about a plane crash, and a couple of tortured souls who endure their individual recoveries.

It notes it's based on true events, although all of the details, except for the crash, are fictionalized. According to the Wikipedia article about the movie, it seems only that there was an airplane crash, an air traffic controller, and a grieving family member. The movie character motivations are different, as is the outcome.

Arnold Schwarzenegger plays Roman, a construction worker who starts the movie looking for his wife and daughter to return from travels abroad. Scott McNairy plays Jake, an air traffic controller on whose watch the flight with Roman's family collides with another. The story follows these men, and their separate paths to recover from this event, and their eventual path-crossing and its outcomes.

The movie starts with some character introduction, where we see Roman preparing to retrieve his family from the airport, and Jake working hard to keep aircraft safely moving.

In what I hope is a dramatic tale and not as close to reality as it probably is, the air traffic controller is momentarily alone, juggling aircraft and trying to call an airport from a misbehaving phone across the room. During a period of transition, one of the aircraft notes that they haven't heard back on their request to adjust altitude, so they're doing it anyway. This results in a collision with another aircraft, killing all aboard in the resulting crashes.

From there, it's a pretty good tale about the different perspectives of survivors involved. I liked how the characters' different resolutions developed. It was all presented in reasonably realistic fashions, given the media. As I watched, I felt I could relate to both of the main characters had I been either one of them.

Roman struggles to regain meaning in his life, and sets about seeking some acknowledgement of responsibility from the airlines and parties involved. Jake suffers with the guilt of letting the collision happen on his watch, and the impact it has on his family and work, as he becomes the center of focus for the media and, presumably, other survivors.

Here I think McNairy wins the acting over Schwarzenegger. Both did good jobs, but Schwarzenegger got off a little easier with a stoic character who works to confine his loss and rage, and present his needs with grace and composure, even when he's angry. McNairy, on the other hand, twist and spins in a dark way, spiraling ever more alone in his guilt.

What I didn't like most about the film is that it took a lot of time to develop the characters to their climactic, and inevitable, meeting. Their meeting went as you might expect when you get there, even if you expect more than one possible outcome. And then it resolves what could have been much more interesting character development in just a few short scenes. It did resolve, and it was a good ending, it was just very fast; almost a montage of closure.

At the end credits I felt a bit "huh, that was a lot of character development for a rapid conclusion."