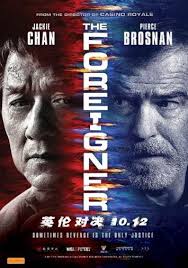 After the kids went to bed I turned on a little bit of a revenge thriller with Jackie Chan and Pierce Brosnan.

The movie starts out with Jackie Chan, playing Quan Minh, taking his daughter to look for a dress for a dance. Before he can park the car, the shopping trip is interrupted with a car bomb. Quan spends the rest of the movie seeking Revenge.

While this is happening, the British and Irish police are seeking the perpetrators, who had claimed to be the Authentic IRA. Pierce Brosnan, playing Liam Hennessy, is an Irish leader, formerly in the IRA, wants to keep the peace and calls on his board of previous IRA leaders to help find the bombers, too.

Their stories intersect as the characters follow their separate lines of resolution. There’s a delightful blend of action and drama, in a compelling story of justice, with some revenge, and a few twists, too.

There's not a lot of disbelief to suspend, which is nice. While packaged for a nearly two-hour long movie, the character development is well paced, and almost iterative to let you accept the various twists and shifts that happen. The plot builds with the characters, and the twists are acceptable and not entirely predictable. Oh, and not that you'd expect different with a Jackie Chan movie, but there's some good action fighting, too.

This entry was posted by jkwarren and is filed under Movies. Tags: movie