The weather has warmed enough that the bugs (however you take that) have awoken. Some have decided that inside my house is a good place to gather and look for food. It's not a lie, because I do it, but it isn't what we want for bugs.

It's actually been a couple of weeks that we've been seeing the occasional little ant, and occasionally a little group of little ants. Mostly in the kitchen, in pretty small numbers, around the sink and the little compost trash can we have on the countertop. Today there was a little ant party in the corner of the dining room, no doubt cleaning our floor. It was decided now was the time to do something about it.

In a previous drive-around, we'd stopped by the hardware store an picked up a generous bag of Spectracide Triazicide, a pest controller we've used for years. 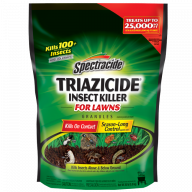 Normally I get a one-pound shaker tube or two, and that's enough to do our whole yard a few times. We don't have to do where the house or garage are, so it's enough to do our lawn three or four times over. This stuff is awesome, and offers a "season" of protection. In the past, we've put some on in the snow-stops part of spring, and then sometimes later in the "every thing's worn off" part of the summer.

Today I just sprinkled some around the perimeter of the house. Since it's a giant bag, I found a bucket and dumped some in there, and then using one of the many play shovels we have (there's a half dozen sand-castle buckets with spades in the garage), I spread a generous amount in about a few-foot border around the house.

Getting under the deck is usually the hardest part, for which I'll use a seed spreader, but mine has disappeared. The wife thinks she let her mom take it last fall when they cleaned the garage, because we don't use it. Well, now we don't. I did fling stuff under the deck and porch as much as I can, mostly to try to keep the ants from using the porch or deck, for much the same reasons we don't want them using the dining room or kitchen.

Later, when we start paying attention to the lawn, I'll sprinkle some on the grass and in the hasta beds lining our fence and sidewalks. I usually do this on days it's due to rain, or days before that, so that the dogs and kids can use the yard as soon as the rain goes away and dries up, as recommended on the packaging.

Fingers crossed that we've curbed the ants for the moment. Generally, ants, I mean you no harm, but you should stay outside and off my stuff.

This entry was posted by Jeff and filed under Blather. Tags: maintenance, yardwork.