Netflix released a piece of political satire, wherein the world is about to be destroyed by an extinction-level asteroid, but society and politicians aren't rightly concerned. 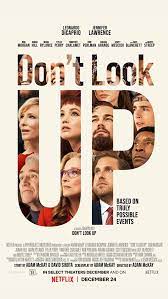 Dibiasky is working with Minsky to study supernovas in the galaxy when she notices a strange object moving in the sky. Investigation follows, and a previously undiscovered comet is discovered, and named after the discoverer, Dibiasky. Comet Dibiasky is found to be on a collision course with Earth, in just about six months. This is peer reviewed and confirmed, and the findings brought to the attention of NASA and the US Government.

That's when it starts to get hilarious, and peeks under the bonnet at all of the things going wrong right now.

The comet they find is estimated to be give or take 10Km wide. That's about the size of the one that they estimate destroyed the dinosaurs. The movie says that's about as big as Mt. Everest, but I think it's easier to visualize what we can see of Hawaii's island, Kauai. Everest is surrounded by other mountains, and one might try to argue "which bits do you mean?" Kauai is surrounded by ocean, and while bigger to the bottom under the sea, the parts we can see above the ocean are a little bigger than the movie guesses their comet to be. Plus, it gives an easy visualization of how small it is compared to the Pacific ocean and Earth in general. It takes a few zooms in Google Maps to see it, even after you find the big island of Hawaii. In addition to the size, it's the mass and speed of the comet that's concerning. Hitting the atmosphere at give-or take 35,000MPH with the mass of a tropical island would release a few million megatons of energy, or thousands of our largest nukes to date, or the energy of all of the earthquakes ever recorded, but at once.

Hitting the Pacific, as the scenario in the movie used, the impact would effectively push all of the water away from the impact, reaching thousands of feet high, as it's thousands of feet deep, racing at in incredible pace in all directions, shooting up continental shelves, over mountain ranges, and across plains, until it effectively wiped out everything. The water wouldn't stay still, of course, and would largely return to the oceans, by whatever floodplain was wherever the water ended up. In addition, a shock wave pushing the atmosphere at hundreds of miles an hour ahead of the water, and rippling through the mantle would cause earthquakes and plate shifts and breaks, essentially around the world. This has been explained to us in many movies and documentaries, maybe exaggerated a little for entertainment, but spectacular depictions aside, not too far off from so many models.

The movie scientists bring this to the attention of the government, that they believe will start to act to try to do something about this. The president and staff, media and celebrities, all weigh this against popular opinion, impact of ratings, and timeliness of politics. The scientists are asked to wait while the situation is assessed, essentially an attempt to silence them and work toward finding a beneficial time to release the information. They mull this over and decide to leak the information, with the guidance of their NASA counterpart. This goes horribly wrong as well, as they are not "media trained," and their harsh and sad message is not fitting with the entertainment style of the information show they started with. Social media begins discounting their story, and based on this consensus, their message is buried beneath a mountain of misinformation.

This introspective into our current state of information sharing and how society lives with this is fantastic. The discounting and dismissing of the unwanted doom-and-gloom information is exactly what it seems would happen if this happened today. This is the meaning of this movie.

The scientists get caught in this. Dibiasky is discredited because of a brief rant she made during the first media interview, as she was frustrated at the lack of concern expressed by the hosts. Minky gets caught up in the White House machine and appears on television shows and ads helping soften the message he knows to be doom and gloom.They fold through aborted attempts to try to redirect the comet, instead choosing to try to break apart the comet and harvest its minerals. This, of course, is folly, because one big comet or many small comets still have all of that mass and velocity, and while maybe a notch or two less violent, it would still be devastating when it impacted.

The movie climaxes as the two camps dissolve into media campaigns telling each other to look up or not, as the comet becomes clear and visible in the sky on its final approach. As the "don't" camp rallies around the cry, and its evil and awkward messaging, someone steals a peek skyward and sees the comet for the first time. The American leadership rallies around the comet mining idea, and other attempts to divert the comet fail. Ultimately, the attempt to mine it fails, as we've never tried to break apart something so big, especially something moving so fast and so far away. The comet collides, and only the super rich survive, briefly (although for a very long time, but they're in cryogenic stasis) on a different Goldilocks zone planet.

I peeked at some other reviews, and a strong divide exists between roughly three camps: those that didn't get it and gave up, those that didn't get it and complained about it, and those that got it, whether they complained or not. Most of the reviews seemed to jump on comparing the asteroid in the film to climate change. While that probably isn't unfair, it also misses the bigger message about what's wrong in our governments and society, America in particular.

I found that all of those reviews reinforced the message of the movie. The people didn't get it. It isn't an action asteroid movie, like Armageddon or Deep Impact, both of which bring home some of that science and devastation quite visually. Some of the dialogue is repetitive and some of the science is covered or hedged, but that's not the point, either. The societal dismissing of that unwanted message of impending doom. That cultural divide that makes everything disagreeable seem like an attack, or something to be attacked. The consensus, not fact or even discourse, that leads to policy. The greed that turns its back on those facts and that discourse. That's what this movie is shining a light on.

The characters have flaws. The system beats them, and they have to go with it a bit. They fight a good fight, and in the end, the inevitable happens, and a giant rock from space destroys everything we know. The characters recover, though, returning to their beliefs and cores.

The movie is well shot. The imagery and characters match the story and make it possibly real. There are a couple of caricatures, like Jonah Hill's character, the son of the president and also chief of staff. And Ron Perlman's hero from another era. Other than that, and even with that, the characters fit their roles. They engage with the story just right, and lead to some of the subtle, and not so subtle, chuckles and guffaws while watching. Even the impact effects, clearly where most of that budget went, was well done. It wasn't gratuitous or unbelievable.

There are even a couple of telling epilogues, before (during the beginning) and after the end credits. It doesn't add to the story, but does pin some more absurdity to the outcome.

I think, after reading the other reviews, that if you can't watch the movie, or you disagree with the message, you might be the kind that would be at a "don't look up" rally, chanting against the sky, which holds the clear and bright object you refuse to consider.