I check out XKCD most days (it's actually on my Google home page, so it's effortless), and this was the one on yesterday. 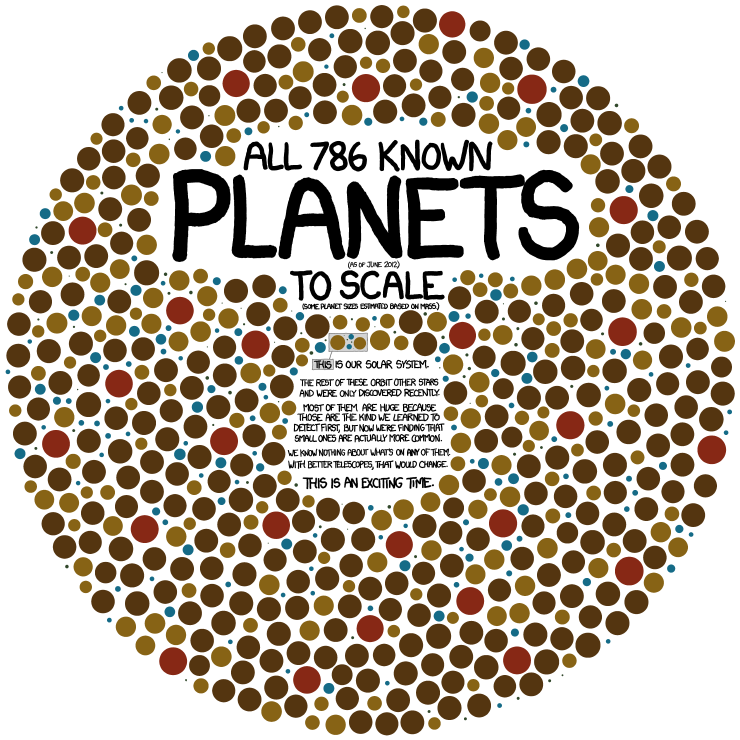 Of course, I'm no astronomer. I'm pretty savvy with the math (although the wife likes to point out I'm a little weaker with math containing actual numbers...) and conversational physics and astronomy. I understand that they're detecting planets by perceiving dimming and wobble and other observations of stars. I haven't seen the math or tried to verfy it, nor am I trying to dispute anything.

I suggest, however, that since this is a relatively new technique, that they still haven't got it right, and I mean that in a way that agrees with the comic (there are a lot more planets out there than we've discovered), and a way that disagrees with it (I'm not as sure that we're as good at approximating the size or composition of the probable planets we have discovered).

To the first, I think it's probably the case that almost every star has had, is forming, or will have planets. It's pretty likely that every star has some orbiting matter. If you consider accretion as the more probable way that at least planets (if not stars) are created, then much of that matter has probably turned into larger masses.

There surely exist younger stars that haven't been around long enough for planets to form. Brand new stars proabably still have matter nearby that didn't make it into the star's intial mass, and new matter is probably being gained by the new star's newly increased gravity.

It's rather likely that most stars of a certain age have had orbiting matter long enough for it to beocme planetary matter. These right-aged stars probably all have planets or remains of failed planets. Depending on how one envisions acretion working, and at what stage things are, and what collisions occur, and all of that chaos magic, there are probably dirt clumps and boiling masses and gas giants working in and out of existence all of the time. On a galactic or universal scale, that is...not just in any given Earth minute...

Further, the theories we grew up with suggest that our own star, like most or all of the others, will eventually fail. The failing sun will either consume or release the matter orbiting it, before, during, and after the actual demise of the star. That means that stars beyond a certain age have probably consumed or lost their planets. These lost planets, it has been suggested, can become interstellar rogues, or possibly even get captured by other stars. And as stars super-nova, matter is expelled, which may go far enough to be captured by another star, or even re-acrete and form a new star in more-or-less the same place.

Conversationally say our galaxy has only a billion stars (real estimates say a hundred times that, or more). If we just conversationally divide it and say a third are too old, and a third are too young, and a third are just right (with props to Goldilocks), we have more than 300 million stars that would have planets. Even if those stars have just one planet each, that's a lot more than the 800-or-so that have been "discovered" so far.

Conversationally, the planetary detection is done by noticing changes in stellar intensity or position or both. The idea is that a star with a planet will wobble a little as the planet orbits, and that the light will be obscured some as the planet passes between the star and our observation. Both solid ideas, and there's math that works to prove it. I think that we're just a little off there simply due to the scale of solar systems, and the relatively limited period of observation, especially when combined with the resolution with which we can observe.

Consider our solar system as a model for what might be happening at a star we're observing from several light years away. 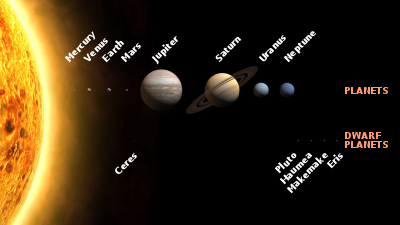 Those that share the techinque (and based on our converstation-starting image) point out that we're more likely to see the effect of massive gas giants, like our own Jupiter. If we were observing our solar system from those distances, we'd have to wait 12 Earth years for Jupiter to transit the star in order to observe any change in intensity; there are probably ten or so years that Jupiter isn't between our sun and any given star out there. And that assumes that the planet is on the correct plane be so observed; if we were looking more "downward," we wouldn't observe any change in intensity, but only wobble. And it'd be slow wobble at that.

The impact of Earth, by comparison, is pretty small, and it's currently really difficult if not nearly impossible to detect planets so small. Planets like Mercury and Venus are hard to see from Earth, in terms of star-wobble and intensity obscuring.

Of course, I'm not suggesting they're wrong. I'm not sure they're completely right, though, either; meaning I think they aren't done working it all out. Better instruments and longer observation periods will continue to improve our detection skills. If a star works out to be a few pixels in our imaging, what chance to planets have to be noticed? And even then, what does a shift in the pixel really mean, given the amount of stuff between here and there?

Don't get me wrong; I think they've got the right ideas, techniques, math, and all of that. Again, I merely suggest it'll get better.

We'll find that the wobble isn't because of one super giant planet, but because of many like Jupiter and Saturn, and even Uranus and Neptune in our system. We'll be able to better detect the smaller planets, and maybe even notice the effects on those bodies by their moons...and maybe even find that some moons have moons...

We'll also find larger planets (perhaps about to collapse under their own mass and form stars of their own), and smaller planets. We'll find combinations of liquid and solid and ice and gas that we've not considered, both in planetary size, orbital position and period, chemical compisition, and element proportion.

Consider this image, which shows lots of galaxies, in a pinch of space about the size of a dime when held to the sky at arm's length... If those galaxies (there must be hundreds in that snapshot) were the same (just a billion stars, with just a third the right age...) that's more than a billion of planets (a third of a hundred billions of stars approaches a billion, so I feel safe conversationally rounding up). And that's in one dime-size bit of our sky; one relatively dark part of our sky.

The universe, like our solar system and the Milky Way galaxy, is thought to be more disk-shaped than sphere-shaped. Well, the matter within it seems more organized that way, anyhow; the space is infinite, which kind of supercedes spherical. That means that in some directions there are even more stars and galaxies.

As unique as we are, I have a hard time thinking the whole universe is here just for our enjoyment; especially since we can't even see most of it, muchless travel there to experience it close-up.

I suppose it's possible that all of the rest of the events in the history of the universe may have been necessary to get the right amount of light and gravity and concentration of cosmic rays in the right places and timings to get the right molecules to form on our little bit of rock, orbiting our little sun, in our little galaxy to allow life as we know it to form.

It seems more likely that those effects took place elsewhere, too.

It's quite probable that the different combinations of molecules in the different places have come up with different bases on which life can be formed. We're carbon-based. We need water and oxygen. Here, silicon-based life forms would suffer and be unstable, but elsewhere maybe not. Here, to us, radition is bad and deforms and kills. Maybe elsewhere it isn't and doesn't.

Maybe there aren't other bipedal, quadrapedal, or even recognizably structural life forms out there. There are probably as many potential variations as there are combinations of atoms into molecules and molecules into DNA or RNA and protiens and enzymes and all of that really low-level biology stuff. These things no doubt create life of some kind. Maybe not civilized. Maybe beyond our concepts of civilization.

It just seems that there are too many places for too many possibilites for just this one to have it all.

This entry was posted by jkwarren and is filed under Blather.