After much procrastination and hoping that the weeds would kill each other, I finally had the time and energy and daylight to see to clearing the brush growing on the south side of our house. 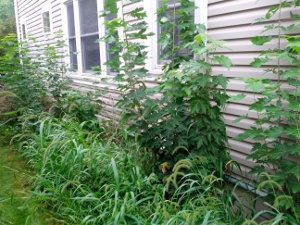 The trees, unfortunately, grow from stumps against the house, or from new sprouts sometimes even underneath the back of the house. A 1950's addition to the original 1930's structure has the back of the house on a slab instead of over an extension to the basement; curiously, when we remodelled in 2003, "squaring" our previously "U-shaped" home, we were compelled to dig a small basement between the slabs. Regardless, I might consider leaving a tree if it was growing more than a few feet from the house, but they never try.

I liked the tall grasses, and had hoped to be able to leave them, but on closer inspection they were clumped a little too far apart and the spaces between were filled with evil little pokey weeds. Plus, despite my (early) efforts to try to work around the tall grasses, they got kind of trampled as I trimmed the tree sprouts from their stumps and pulled the other weeds from between.

According to the timestamps on the original images, the work only took two hours and twenty minutes. I'll call it two hours, though 'cause I did take a bit of a break after the chopping, before the bagging. I had to pull the burrs from my gloves as they'd gotten so thick that it was hurting to grab things. Nature fights back mean, yo. 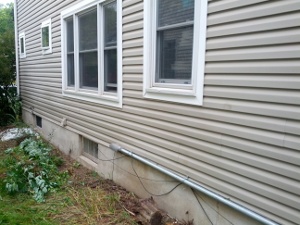 In the end, I ended up clearing away all of the trees and high grasses, trimming the grass with a scythe. The wife came out and pruned the bush (kind of by that farthest-away basement window) that was about half dead branches due to weeds wrapping them and stealing the leaf space.

I managed to fill my remaining four lawn bags with debris. The little clump shown here is all that remains. In addition to making the ground clear (by shading the short grass), the weeds had clung to the coax and telephone wires previously zip-tied to the air-conditioner conduit. I finished just as the rain came, hopefully refreshing the newly exposed grass.

Later (hopefully yet this weekend) I'll get some more lawn bags to complete the clean-up, and tie-up the wires.

This entry was posted by Jeff and filed under Blather. Tags: yardwork.